The Race to Create a Web of Reputation


One of the big issues with the ongoing explosion of social media, whether it’s blogging or Twitter or Facebook, is a lack of effective ways to filter the signal from the noise — in other words, to figure out who we should pay attention to. Facebook relies on your existing social graph, while Twitter uses its own internal algorithms to suggest people you should follow, and LinkedIn uses your professional status and co-workers or contacts as the benchmark. But the race continues to try and measure online reputation in an effective way. Should it be based on activity? Number of followers? A ranking system in which people can vote on you? All of the above?
One of the latest to jump into this race is Mixtent, which launched today with a voting-based system that uses data from your LinkedIn profile once you log in with your credentials (and will also pull in your Facebook info if you connect that as well). The company says it is “building a professional reputation graph on top of the main social and professional networks” in order to help people hire others and get hired themselves. If Mixtent looks a little familiar, that’s because it appears to be almost identical to a LinkedIn-based game known as Cube Duel that got some attention a couple of weeks ago, in which users vote for co-workers and can “unlock” various badges, and so on. 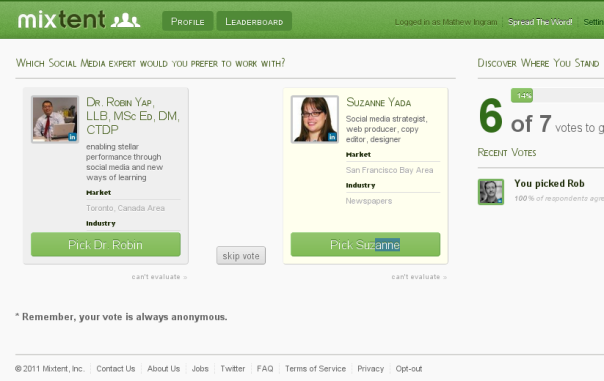 In trying to measure who has the highest reputation among your co-workers, and therefore who is best qualified to either recommend you or be recommended themselves, Mixtent is going after the same kind of market that other startups such as Honestly (formerly known as Unvarnished), Namesake and BranchOut are aiming at — namely, the professional end of the social web, in which people are looking to network for jobs. In the same way that Mixtent is based on the LinkedIn network, BranchOut uses Facebook as a platform, and leverages all of the people you are connected to via your social graph who might work (or used to work) at other companies.
One issue for BranchOut that I wrote about when the service first launched is that Facebook is primarily personal, and so the overlap between that part of your life and the professional side is haphazard at best, and useless at worst. In a similar way, the game-like aspect of Mixtent might not jibe well with the more professional aspects of LinkedIn for some users. Honestly, meanwhile, is trying to create a reputation-based network that achieves the same thing as LinkedIn or BranchOut — a way of measuring a person’s skills within a certain professional context — but allows for anonymous (and therefore theoretically more honest) input about the people who are being ranked.

Read The Rest Of The GIGAOM Article

Email ThisBlogThis!Share to TwitterShare to FacebookShare to Pinterest
Labels: LinkedIn